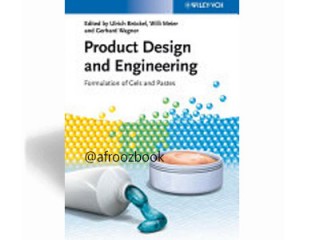 Cod 32205- Product Design and Engineering: Formulation of Gels and Pastes

Product Design and Engineering: Formulation of Gels and Pastes 372 pages

Product Design and Engineering: Formulation of Gels and Pastes

Ulrich Brockel studied chemical engineering at the Technical University of Karlsruhe, and gained his doctorate at the Institute of Mechanical Engineering in 1991. After an industrial career at the BASF process engineering department - leading a team responsible for agglomeration and product design of solids - he became Professor at the University of Applied Sciences Trier in 2000. He is a member of APV, DECHEMA, GVC, and also chairs the section group -''Product Design and Engineering'' at the European Federation of Chemical Engineering (EFCE). Professor Brockel's work focuses on solids processing and plant design.

Willi Meier studied chemistry at the RWTH Aachen, where he gained his PhD in 1992. He is responsible for the international cooperation of the DECHEMA and is coordinating the research activities of the section groups of the EFCE and the European Federation of Biotechnology.
In 2013, he was appointed honorary professor at the Technical University of Clausthal.

Gerhard Wagner studied chemical engineering at the Technical University of Munich, where he gained his PhD. He has since held different scientific and managerial positions in R&D at Hoffmann-La Roche in Switzerland and DSM in Europe, US and China. After leading the
Formulation R&D Department, and being responsible for the R&D strategy development and acquisitions and integrations of R&D groups worldwide, he is currently the Vice President and global R&D director of the DSM Biotechnology Center in Delft and Shanghai. Dr. Wagner
co-chairs the section group ''Product Design and Engineering'' within the EFCE.
نظرات